An investigation by the Southern Poverty Law Center (SPLC) and Alabama Disabilities Advocacy Program (ADAP) has found that for many people incarcerated in Alabama’s state prisons, a sentence is more than a loss of freedom. Prisoners, including those with disabilities and serious physical and mental illnesses, are condemned to penitentiaries where systemic indifference, discrimination and dangerous – even life-threatening – conditions are the norm.

An investigation by the Southern Poverty Law Center (SPLC) and Alabama Disabilities Advocacy Program (ADAP) has found that for many people incarcerated in Alabama’s state prisons, a sentence is more than a loss of freedom. Prisoners, including those with disabilities and serious physical and mental illnesses, are condemned to penitentiaries where systemic indifference, discrimination and dangerous – even life-threatening – conditions are the norm.

The Alabama Department of Corrections (ADOC) is deliberately indifferent to the serious medical needs of the prisoners in its custody. Inspections of 15 Alabama prisons, interviews with well over 100 prisoners and a review of thousands of pages of medical records, depositions and media accounts – as well as the policies, contracts and reports of the department and two major contractors – lead to one inescapable conclusion: Alabama’s prisons violate federal law protecting people with disabilities and the U.S. Constitution’s ban on “cruel and unusual punishments.” 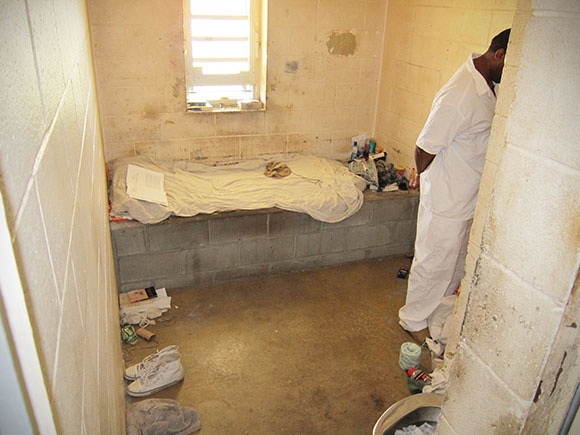 END_OF_DOCUMENT_TOKEN_TO_BE_REPLACED

Around the first week of May 2015, i was incarcerated at Houston County Jail and being held in ‘N’ Pod. During this time another female inmate was in one of the lock down (Segregation) cells located in ‘N’ Pod. She hurt her foot whilst in the cell and was taken to health care in a wheelchair.

They moved her to one of the ground floor cells that night. The next day she was taken back to health care in a wheelchair and returned in a wheelchair.

The male officer told her to walk upstairs, but she explained that her foot was hurt. After several minutes of discussion the male officer left and returned with a second male officer. The first officer said to the inmate, ” I told you i’m not gonna play games with you, i don’t have time for this”.

He asked the second officer to grab the inmates legs, but the officer declined. The first officer then grabbed the inmates arms and began dragging the inmate up the stairs.

The entire time, the inmate was screaming about her foot and her leg, but the officer didn’t stop until he had gotten the inmate up the stairs and into a lockdown (segregation) cell.

I don’t think its right that us females have to show an officer that we are on our cycle on in order to receive sanitary pads.

The toilets only flush 2 X’s an hour and thats not good when its like 20 something inmates having to use it.

After we take a shower, i don’t think its right that on 3rd shift they come search us and make us undress then squat and flip our breasts.

Its not safe for us to sleep on bare mattresses due to them not being hygieneically cleaned in between use and we don’t have bed sheets anymore.

Its not right that they can cut our hair whenever they are ready, even when its collar length.

They keep the temperature at 50 to 60 degrees even during the winter when we only have one thin blanket and no bed sheets.

END_OF_DOCUMENT_TOKEN_TO_BE_REPLACED

“With the disproportionate number of people of color that are impoverished or living in states where one hour of the minimum wage could not cover the cost of one phone call to loved ones, we need to do all that we can to reform prison phone services.”#RightToConnect #PhoneJustice

have your say here

I was left in a holding cell for 24hrs with no pads given to me after I told the guards I started my period. The next day my jumpsuit was covered in blood. Officer Morris came on shift and was shocked by the blood and shook her head when I told her I asked for pads but was not given any. She got me a clean jumpsuit and a few pads.

END_OF_DOCUMENT_TOKEN_TO_BE_REPLACED

For several years Houston County Jail has made it increasingly difficult for those held in the jail to be visited by their loved ones all be it behind glass as the governors of the jail insisted on a maximum security, no physical contact policy. Now their motive has been revealed as the county commission has approved a contract with Legacy Inmate, negotiated in December 2014 to handle the jail’s phone system. The contract will allegedly create a guaranteed revenue of $540,000 over three years, of which the county will receive 90 percent. Legacy also agreed to provide inmate video communication systems at no additional cost to the county.

END_OF_DOCUMENT_TOKEN_TO_BE_REPLACED

The conditions at Houston County Jail are terrible.

I was in O pod for 3.5 weeks. The toilets leaked (all of them) and worms come out from under them. When we are rolled in from 2pm to 4pm we are not allowed to lay down. So we are up from 9:30am to 10pm. We have nothing to help occupy our time.

There is a library full of books but they won’t even let us read them. On commissary day (Thursday) the whole jail is locked down.For what reason i don’t know. Most of the officers are just rude and will not answer the questions we may have.

The food is often times cold by the time it is served to us. When we are first booked in, we are given an intake pack which consists of a little tooth brush, a little tube of tooth paste, 2 stamped envelopes, 4 pieces of paper and a roll of tissue. The roll of tissue is supposed to last us for 2 weeks (they give out tissue to the indigent every 2 weeks) If you need pads, they charge $6.50 for a pack of 12.

Please sign the petition through the link below, and let those that think that they are above the law face retribution. Change is coming to Houston County Jail in Dothan AL. Stand with us and help make it happen.

MY NAME IS CHRYCYNTHIA WARD DAVIS.  MY SON KHARON T. DAVIS WAS ALLEGEDLY CHARGED WITH CAPITAL MURDER ON JUNE 9, 2007 AND HAS BEEN HELD AT THE HOUSTON COUNTY JAIL IN DOTHAN AL, WITHOUT BOND AND HAS NOT BEEN TO TRIAL.    PUNISHMENT IS ONE THING BUT BEING LOCKED AWAY FROM FAMILY, FRIENDS, SOCIETY AND EVEN THE MAIN POPULATION OF OTHER INMATES, FORCED TO BE ON CONSISTENT LOCKDOWN SINCE AUGUST 2014 UNDER THE ORDERS OF THE JAIL COMMANDER KEITH REED IS BEYOND HUMANITY.  MY SON KHARON HAS BEEN SUBJECTED TO DEPLORABLE AND WRETCHED LIVING CONDITIONS.  MY SON WROTE A 10 PAGE LETTER ON MAY 7, 2013 REGARDING THE PSYCHOLOGICAL INTIMIDATIONS/MISTREATMENTS/ BULLYING OF SOME OF THE JAIL CORRECTIONAL OFFICERS AND ADMINISTRATIVE STAFF.

President Barack Obama
Attorney General Loretta Lynch
I FEEL THAT AN UNBIASED REVIEW BY THE DEPARTMENT OF JUSTICE SHOULD BE CONDUCTED OF THE LOCKDOWN POLICY AND THE INMATE RULES WHICH ARE SET UP BY DESIGN TO MANIPULATE GUILT OF THE INMATES AT THE HOUSTON COUNTY JAIL.
Chrycynthis Ward Davis Interview
Sign the petition here

Plaintiff Ronald Paul Adams commenced this action by filing a complaint in this Court on November 18, 1974. The petitioner asked that the Court treat his complaint as a class action by all incarcerated in the Houston County Jail and sought an injunction prohibiting alleged constitutional deprivations, including overcrowding, poor sanitation, and inadequate diet and medical care. The United States became involved when the Court appointed the United States Attorney for this district as amicus curiae. This order was entered on the basis of allegations in the complaint concerning interference with the mail to and from the District Court and also on the basis of a contract between the United States and Houston County to house federal prisoners in the Houston County Jail. In March, 1975, the United States moved to intervene in the action and also filed a complaint in intervention.1 The claim for intervention was grounded in the First, Sixth, Eighth, andFourteenth Amendments to the Constitution; jurisdiction was based upon 28 U.S.C. § 1343, 1345, 2201 and on the constitutional amendments cited.